“The Etruscans and the Mediterranean – The City of Cerveteri” through July 20, 2014

The Etruscans and the Mediterranean: The City of Cerveteri

This exhibition offers visitors a unique opportunity to take a fresh look at the Etruscan civilization, one of the most extraordinary ones of the ancient world. It focuses on a single city, Cerveteri, which occupies a leading position in terms of both size and importance in the context of relations among the peoples of the Mediterranean in ancient times. The city, which the Etruscans called Kaisraie, the Greeks Agylla, and the Romans Caere, symbolizes the grandeur of the Etruscan civilization, occupying a central position in Italy and in the Mediterranean throughout the 1st millennium BC. Indeed it is no mere coincidence that Caere in the ancient world was considered “the most prosperous and heavily populated city of Etruria”, as the Greek historian Dionysius of Halicarnassus tells us.

The exhibition sets out to explore almost ten centuries in the history of this ancient Italian metropolis situated only fifty kilometers from Rome, taking a look at how what were initially separate communities gradually merged to form a city, how that city facing the sea rose to become one of the leading powers in the Mediterranean, how it vied in importance with Rome itself, and how it was ultimately dominated by Rome and absorbed into the embryonic Roman Empire in the course of the 1st century BC. 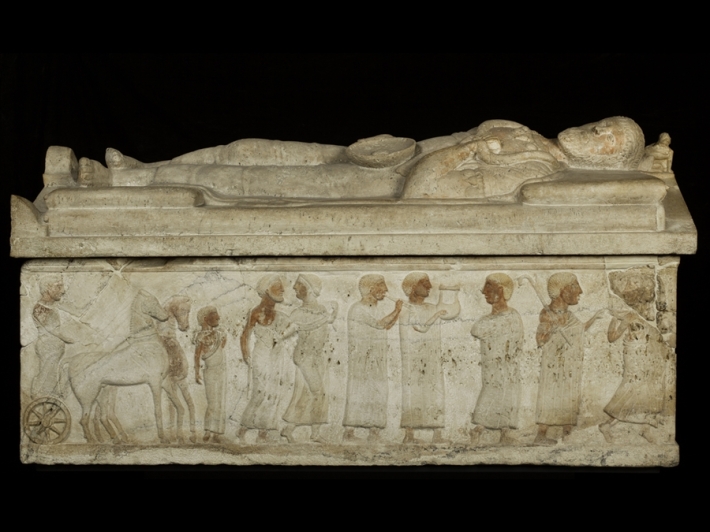 The story of Cerveteri and its inhabitants, the Cerites, is not known to us only from the Classical texts, however. It has also been slowly emerging from the soil for the past two centuries. Major archaeological digs conducted, in particular, in the 19th century revealed a staggering number of monuments and finds that fired people’s imagination and were eagerly snapped up by the world’s leading museums, in particular by the Louvre and by the Museo Etrusco di Villa Giulia in Rome. These early but now long-ago discoveries can be compared today with the results obtained by the scientific excavations conducted in the heart of the ancient city, but also in the necropolises and the area ruled by the city, in recent decades. This unprecedented comparison provides visitors for the very first time with the portrait of a city which, like Athens, Carthage and Rome, was one of the greatest and most important metropolises in the Mediterranean in ancient times.

The exhibition offers us a unique opportunity to gather, around a core of exhibits of the utmost importance from the collections of the Museo Nazionale Etrusco di Villa Giulia and the Museo Nazionale di Cerveteri, also the most significant works known to have come from Cerveteri but now in other major historical collections in the Old World: the Museo Gregoriano Etrusco in the Vatican, the British Museum in London, the Ny Carlsberg Glyptotek in Copenhagen and the Antikensammlung in Berlin. This will allow us to ideally reconstruct ancient environments and contexts, many of which have been dispersed in different museums since the 19th century. The Louvre’s contribution to the exhibition is truly exceptional.

Thanks to its acquisition in 1861 of the Campana Collection consisting largely of finds from Cerveteri, the museum holds an extraordinarily rich stock of items from the city, including not only the most famous masterpieces of Etruscan art such as the Sarcophagus of the Spouses (which is on display in the exhibition, traveling outside Paris for the very first time since it entered the Louvre), but also numerous remarkable exhibits either put on public display only very recently or on public display here for the very first time since their discovery. And finally, there is material never seen before now from the recent excavations conducted by the Soprintendenza, by the CNR and by Rome Sapienza University – excavations that have revolutionized our knowledge of this metropolis of primary importance in the Mediterranean in ancient times.

See the Studio Art Centers International (SACI) course in the Conservation of Archaeological Artifacts where work focuses on the practical conservation of artifacts using original Etruscan pieces from Italian official excavations and from archaeological museums.