Every year on June 24th, the city of Florence celebrates the feast of its patron saint, San Giovanni (St. John), to whom the Baptistery was dedicated. In the morning there is a traditional historic parade beginning in Piazza Signoria and ending at the Baptistery where candles will be offered for the patron, followed by a mass in the Baptistery. The Baptistery will be free to visit for Florentine residents through September 8, 2015.

Don’t forget, this is a city-wide official holiday and many offices and stores will be closed.

At 2:30pm, the Mayor of Florence will lead the Fiornio d’Oro Ceremony in the Salone dei Cinquecento of the Palazzo Vecchio.

Piazza Santa Croce has been transformed into a sandy playing field where the final match of the famous Calcio in Costume or Calcio Storico Fiorentino (historic Florentine soccer) game will take place at 5pm, a tradition that dates from the 16th century. The game consists of an elaborate production with a parade complete with musicians and flag tossers, and participants dressed in traditional costume. Although it sounds elegant, the competition can be quite violent and occasionally gets cancelled due to players’ bad attitudes, as the sport is a mix between rugby, wrestling, and soccer. This year’s match with between the Green and White teams. 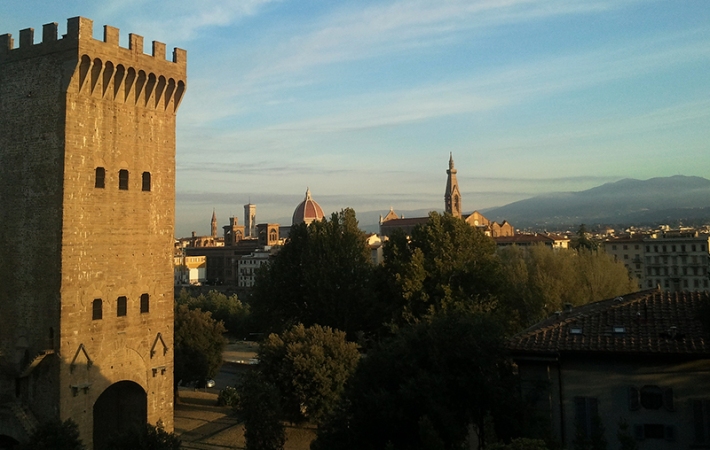 If you want a more calm event, beginning on the 24th through September 30, visitors can climb the Torre di San Niccolò across the river in the neighborhood of the same name, in Piazza Poggi. After climbing 160 steps with a guide, gorgeous panoramic views of the river front and the city’s monument can be seen poking out above the terra cotta roof lines. Open daily 5-8pm, tickets are 4 euro and reservations must be made by calling 055-2768224.

To celebrate the first birthday of the Museo Novencento (Piazza Santa Maria Novella), there will be a free classical concert at 7pm by the young TAAG Quartet. Seats are limited.
www.museonovecento.it

At 9pm, another free concert will be performed by the Fanfara dei Carabinieri along the Arno River at Lungarno della Zecca Vecchia.

And last but not least, when darkness falls at 10pm, crowds of people will gather along the bridges and banks of the Arno River to see the fireworks display shooting off from Piazzale Michelangelo. It is recommended to come early to find a good vantage point for the spectacular show.

This year, at the Easy Living Beach (yes, you read correctly) along the banks of the Arno River at Lungarno Serristori, there will be food stands with burgers and fried fish with a unique perspective of the fireworks from 6pm. Admission is free, but get there early to find a spot…and don’t forget your towel! The evening will be animated by a “Silent Disco” (both before and after the fireworks) a particular type of musical event during which the participants will listen to music on headphones.