15,000 faces drawn on Post-it notes over the last twenty years. 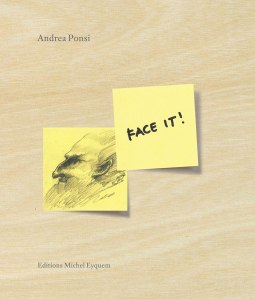 Architect, designer, painter, writer, and SACI Artists Council member, Andrea Ponsi has always considered drawing his favorite activity. Perhaps because he is Italian, he ﬁnds it difficult to talk without gesturing, or at least keeping his hands moving, even when on the telephone while working at his desk. As if driven by an irresistible force, he then takes a pen or pencil, reaches for a pad of Post-its, and begins to draw faces, each one different, each one invented on the spot. The book, FACE IT!, shows the results of this wonderful obsession: about twenty ﬁve hundred faces selected from more than twenty thousand drawn on yellow Post-its over the course of the past twenty years.

Also this month, his new publication, Analogy and Design is available.

Analogy and Design by Andrea Ponsi 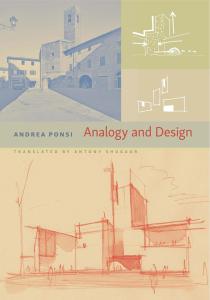 Published by the University of Virginia Press, November 2015, 248p.

Analogical thought is fundamental to creativity. The use of analogy can help to solve problems, make connections between disciplines, and use those relations to form original solutions. In Analogy and Design, Andrea Ponsi considers the role of analogical thought in architectural design. Almost all work on design and architecture is the result of analogical thinking, with respect to systems derived from nature, technical and scientific models, artistic experiences, and above all past models of architecture or objects. Ponsi considers the history of architecture through a series of examples that demonstrate the value of analogy as both creative technique and didactic tool. As an architect and product designer, Ponsi himself operates on a set of principles he terms “analogous design”—a theory he developed that involves breaking down images into abstract elements, analyzing them, and then conceptually reassembling them in another form as a sort of parallel composition.

In Analogy and Design, he looks at the principal models designers have utilized as their reference from the beginning to our own day: primary analogies, that is to say the human body, nature, and the abstract universe of signs; disciplinary analogies, taken from already existing examples of architecture and design; and analogies from outside the field, such as from music, literature, and the visual arts. The components are very different, but they maintain a similar relationship to each other. This methodology, Ponsi maintains, can be applied to compositions of a wide variety of types, including buildings, landscapes, household products, furniture, music, and literature. Merging scientific and academic research—so often limited to a specialized audience—Analogy and Design lays down the principles of analogous design, enabling a student or practitioner to “see” works and materials in a new way.

Andrea Ponsi: San Francisco Through the Eyes of an Italian Architect

Ponsi will also be speaking at The Commonwealth Club of California in San Francisco, 555 Post Street, on Monday, November 23rd at 6:30pm.

Florence native Andrea Ponsi shares his unique vision of San Francisco, the city often described as the most European of American cities. An award-winning architect, designer and artist who has lived and worked in San Francisco for 10 years, Ponsi takes us on a personal exploration of San Francisco that is at once visual, literary, poetic and historical, with illustrations informed by the architect’s Renaissance sensibility and passion for urban design.

Join them for a program with the man San Francisco Chronicle art critic Kenneth Baker called “an impassioned but critical admirer, aware of what he sees on more levels than most.”

For info and tickets: www.commonwealthclub.org

San Francisco: A Map Of Perceptions (University of Virginia Press, 2015, 108p.) Read a book review from the SF Gate.

Find out more about the SACI Artists Council.