“My Circle” sculpture by Beverly Pepper, SACI Artists Council Member, in NYC through May 2016 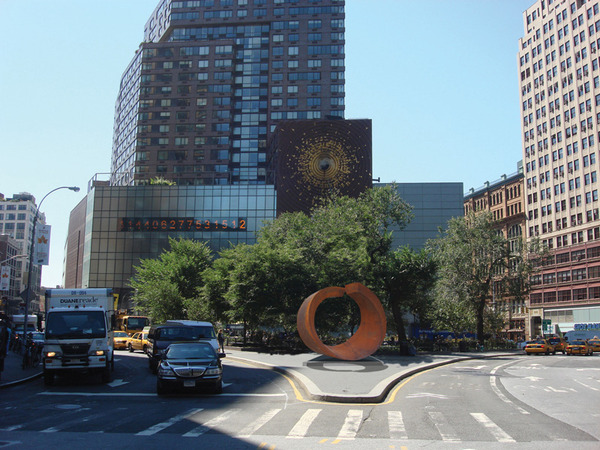 In special recognition of Beverly Pepper’s 93rd birthday, the Directors of Marlborough Gallery, NYC Parks and the Union Square Partnership are pleased to publically display the monumental sculpture My Circle, 2008, being exhibited at the Union Square Triangle in New York from October 22, 2015 through the end of May 2016.

My Circle continues the artist’s contemplation of time, materiality and place, and is part of Curvae, her series of curved forms. By using Cor-Ten steel, a corrosion-resistant material that naturally and quickly develops a weathered-looking patina, Pepper is able to speed up the oxidation process, and in so doing suggest the concept of elapsed time through the sculpture’s skin of rust.

Like many of her monumental works, My Circle engages the viewer through the interplay of convex and concave forms. The use of opposing forces – vertical and horizontal, interior and exterior – creates a lyrical meditation of space that is at once dominant and intimate. The artist has stated that “Seeing, touching, and the physical sensory engagement is the way into my sculpture; my intention is that the meaning of my work rests in experiencing it, similar to the performing arts where listening and seeing the moments of a performance where meaning is revealed through experience.” She notes that My Circle, standing at fourteen feet tall in Cor-Ten steel, for her recalls an image from years ago relating to the symbolic character in Zen Buddhism where it is known as the Enso, a drawing in ink of an open or closed circle. The closed circle represents the totality of experience and life. The open circle represents the imperfection found in all things, and is known as the circle of enlightenment, its symbolism referring to the beginning and end of all things, the circle of life, and the connectedness of existence. What Pepper is drawn to within this narrative is the notion of the “connectedness of existence” and how we can connect people and populations through art.

Born in 1922 in Brooklyn, Beverly Pepper trained as a painter. After studying under Fernand Léger and André Lhote at the Académie de la Grande Chaumière in Paris, Pepper moved to Italy in the 1950s. Later, in 1960, a trip to Angkor Wat inspired her to turn to sculpture. Pepper’s first exhibition of wooden sculptures was held at the Pogliani Gallery in Rome in 1961. In 1962, she participated in the landmark exhibition, Sculpture Nella Citta, alongside David Smith and Alexander Calder in Spoleto, Italy. In addition to a lifetime of gallery exhibitions, she has had numerous solo museum shows, including those at the Albright-Knox Gallery, the Brooklyn Museum, New York; the San Francisco Museum of Modern Art, California; and most recently, Museo dell’Ara Pacis, Rome.

In 2013, Pepper was awarded the International Sculpture Center’s Lifetime Achievement Award as an acknowledgement of her significant and continuing contribution to sculpture. Previous recipients include Louise Bourgeois, Frank Stella and Anthony Caro.

The Union Square Partnership (USP) is a private, not-for-profit community-based organization responsible for the revitalization of the 14th Street-Union Square neighborhood. USP’s mission is to improve the quality-of-life for the district’s residents, businesses and visitors, by providing public safety, sanitation, economic development and marketing services, as well as investing in the beautification and maintenance of Union Square Park. USP also conducts a host of free events for the public, including volunteer days, networking opportunities and “Summer in the Square,” a weekly event series in the park. For more information, visit unionsquarenyc.org

The City of New York’s Department of Parks & Recreation Public Art Program has consistently fostered the creation and installation of temporary public art in parks throughout the five boroughs. Since 1967, collaborations with arts organizations and artists have produced hundreds of public art projects in New York City parks.

SACI is proud to include Beverly Pepper as a member of the SACI Artists Council.