The walk to Pietro Manzo’s studio was far, but lovely because of the sunshine that has been hiding for the past week or so. Crossing the river from the historical center of Florence to the other side is one of my favorite things to do because of the beauty of the Arno. I slowly began to emerge from the busy and touristy areas to a quieter and authentic neighborhood. It was almost like entering a different city.

With Manzo’s assistance, I finally found the unassuming studio, tucked away in the simplistic beauty of the street. He kindly greeted me and led me into an empty room, save for a large painting currently in progress leaning against the wall and a couch. This space was the exact opposite of Baratti Bon’s studio piled high with works. A pencil drawing of a similar style rested on an easel next to the painting, outlining where the rest of the design intended to go. The white wall behind it was drenched in various colors of paint and even some drawn shapes. A somewhat hidden staircase led to a basement which held more paintings and a diptych with an interpretation of what appeared to be an abandoned urban environment.

Abandonment and emptiness are common themes throughout the unique combinations of painting and sculpture that Pietro Manzo creates. There are never any people in his paintings, except for a small self portrait and a few other portraits he has done in the past on small squares that capture only the person’s face. His concepts are focused more on spaces rather than living subjects.

For example, one series of his is entitled the “Grand Tour.” However, Manzo’s version of the Grand Tour strays far from the beaten path of beautiful and historical Renaissance art and architecture. He captures interpretations of real abandoned places in Italy that were under construction and revitalization, but never finished. Manzo gives all of his attention to these empty places, the other side of the spectrum from the packed Grand Tour destinations. In its place he offers a Grand Tour of the other side of Italy, the forgotten side.

One of the pieces in this series, entitled “Souvenir,” is a postcard stand with paintings the size of post cards and made with aluminum. All of the pictures on the postcards are places under construction or abandoned because of the “many problems” Italy has, such as the mafia. Manzo claims that there are many places like this all over Italy, not just in Florence. 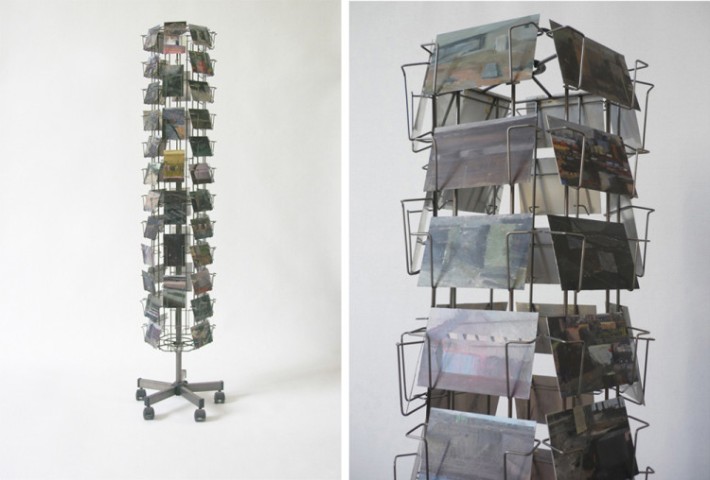 Manzo’s art is an interpretation or an evocation of reality, and never an exact copy of the real thing. In his studio, he had several pieces that were inspired by the same view, but they all look different because they are different representations and viewpoints. He likes to rebuild and reinvent when he paints; to lose himself while he is painting. In the process of painting he never plans what will happen next, he finds it. Manzo says that his work is a “continuous fight” between different mediums and colors, but an enjoyable one, because it gives him the opportunity to view reality in a different way.

He accomplishes this by going to these abandoned sites, and then using what he remembers to create the scene. By using a mental representation of what he remembers instead of painting on-site, Manzo’s art becomes an expression that reshapes the experience and makes it more personal.

The art on display for the Tuscan AngloAmerican Festival is a series of small studies and sketches for larger scale works from the last two years on paper, metal and canvas. The drawings include a series of rooms and beds, empty of course, that he has slept in while traveling or visiting friends all over Italy, which he does quite often. All of these are done from memory, like the abandoned spaces, which will also be present at the Pietro Manzo art exhibition of his paintings and drawings from March 10th in the SACI Maidoff Gallery, on Via Sant’Egidio 14, Florence.

In collaboration with the Tuscan Anglo-American Festival: March 9-11, 2016.