NONFINITO, the final exhibition of SACI’s 2017 graduating class of MFA in Studio Art and MFA in Photography candidates, was on view from April 18-24, 2017 at SENSUS – Luoghi per l’Arte Contemporanea gallery in Florence, Italy.

The research and projects of seven artists of diverse backgrounds and nationalities were exhibited in Nonfinito. The choice of name reflects the continuity they have achieved with the completion of their degrees, and represents the never-ending journey they will undergo as artists post-SACI after two years of guidance by local and international artists and curators, and their instructors: Filipe Rocha da Silva, MFA in Studio Art Program Director, and Romeo Di Loreto and Jacopo Santini, MFA in Photography Program Co-Directors. 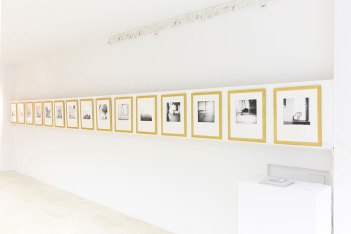 Polina Bessonova is a Russian-born photographer with a background in PR and Media Communications, analog image-making being her biggest passion. Playing with light when catching moods, moments and life fragments on film and drawing with light on paper in the darkroom is her most personal way to share the surrounding emotional revelations.

The project is a discovery of meaning and value of the everydayness, of objects and episodes being both mundane and metaphoric, torn out of the world and made into independent substantial entities, forming a place where one’s heart and mind are at rest – a home. 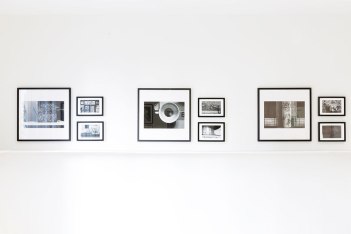 Andrew G. Gatti was born in 1992 in Denver, Colorado in the U.S.A. and has been practicing and creating art for the better part of his life-–photography, printmaking and painting being his primary mediums. The project culminated in a self-published artist’s book which captures the artist’s fragmentary memories. Moments stolen from travels across Western Europe as well as time spent in New York. Through a restless search for a personal vision, he brings the viewers on a sideways journey through the looking glass.

He takes objets trouvés and drags the potential out of them through a surrealist approach at dissociating reality from itself. The unreliable narrator is an apt metaphor for this doppleganger approach to the depiction of the world which cages all of us. He often plays with dichotomies such as the contrast of nature and man-made matter. Much of the work involves the abstraction of basic geometric forms and ambiguous imagery.

Chanel Jami Hackett, an American artist, received her BFA at Barry University in Miami, Florida, before pursuing her MFA at Studio Arts College International in Florence. Her work focuses on the history and lives of Blacks in America, and her primary concern as an artist is to address the social, political, and economic inequalities within all cultures in our world today.

The number of murders committed by the police in America is at an all-time high. According to research, there have been approximately 1,000 deaths in 2015-2016 alone. And yet there is still no change or justice. Inspired by the song Strange Fruit by Billie Holiday, Hooded Fruit was created to lament the astonishing number of victims and force spectators to walk among them. The hanging, yellow strings are the roots of the fruit. The 1,000 apples represent the number of lives taken.

Leon T. Jones is a visual artist from the USA whose work has been shown internationally throughout the past 7 years. He earned his BFA (Photography) from the Kansas City Art Institute in 2013, a Post-Baccalaureate degree from SACI in 2014, and an MFA in Photography from SACI in 2017.

Leon Jones’ works are based in photography, but use the image as an object, vessel, and/or a relational trigger.  Coupled with other traditional mediums, the photograph takes on an alternate role as a record of time and the temporal, engaging concepts rooted in the human condition and its struggle with nature.

The artist uses the process of making 2D and installation works to encrust objects with the inevitable traces of time, burdens of human engrossment, and refined decay in order to mine optic questions and challenge conformity. The work is meant to create struggle between viewer’s inherent perception and visceral reaction. 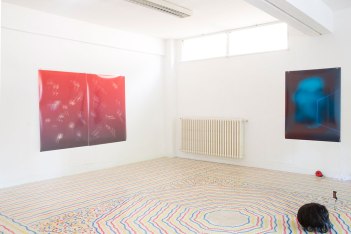 April Whoiwon Moon earned a Bachelor of Education (B.Ed) in Visual Arts from University of Western Ontario and a Bachelor of Fine Arts (BFA) in Drawing and Painting from OCAD University. She has participated in group shows in Canada and Italy.

April Moon’s work ventures into ideas of ephemerality by capturing living moments, simultaneously celebrating the presence of time and lamenting its passage. Afraid of forgetting but also afraid of being forgotten, Moon interrogates our life-long confrontation with mortality by dashing into the digital realm, which began as an almost compulsive resistance to becoming an absentee in her own life. Everywhere yet invisible, the sketchiest fragments of a moment become a set of meditations and a memoir of illusion within reality that revolve around an absent center.

Her recent practice offers a reflection on contemporary philosophy, following the revivifying insights of Baudrillard, Barthes and Foucault on the topics of surveillance, sovereignty, and subjectivity spread across the media, and evokes these widely resonant truths. 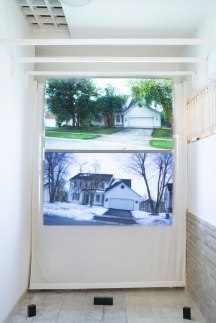 Meaghan Sweeney earned her BA from Hamline University in 2012. Her most recent exhibitions include VACANCY at Residenza d’Epoca in Florence, Italy, and How Many Steps to Reach You? at Rooberoo Mansion in Tehran, Iran.

Focusing on both the quantitative and qualitative aspects of subprime lending and foreclosures, 8640 in Two Parts refers to the recent United States 2008 financial crisis and subsequent bank bailout.

In Part I, through the meditative, repetitive, and deliberate method of hand embroidery, the artist presents a series of maps, graphs, and statistical data references. In Part II, the artist turns from the historical collective to singular experience through the interpretation of loss. This installation describes displacement brought on by a corrupt banking system, layering sound and video with large-scale paintings.

Meredith Taylor is an American artist born and raised in Georgia. Her interest in Italian art and culture began in high school, and she has traveled to Italy numerous times throughout her education.

Meredith completed her bachelor’s degree at the University of Georgia with a dual major in Studio Art and Art History. She then interned in the Department of Painting and Sculpture at the Museum of Modern Art in New York before returning to Italy to enroll in SACI’s MFA in Studio Art program.

Meredith Taylor’s work focuses on the psychology of dreaming and the emotional content of nightmares. The dissolving bodies and the cast body parts signify both the sense of physical disembodiment of sleep and dreaming and the nonsensical plot lines of dreams. The work emotes the tangible, emotional residue that dreams leave behind after one wakes – in this case a largely autobiographical experience, as the artist often experiences vivid and sometimes lucid dream patterns. These themes are expressed using oil painting and sculpture, through a process that reflects the artist’s interest in Italian art history.